Alaska earthquake: Here's what the destruction looks like from the scene

In the wake of the major quake and following aftershocks, residents took to social media to share pictures of the destruction they witnessed.

The quake splintered roads in some locations

A Twitter user reported taking these photos about 25 miles northeast of Anchorage.

The station says it is continuing to livestream its broadcast.


Video shows an exit ramp that collapsed underneath an SUV

In another floor of the building, metal detectors simultaneously sound the alarm as the floor shakes:

'This earthquake straight cracked my school in half,' said one Twitter user

He tweeted a photo showing a cracked floor:

A West Anchorage homeowner posted video of his living room shuddering in the quake; in the background, a child screams 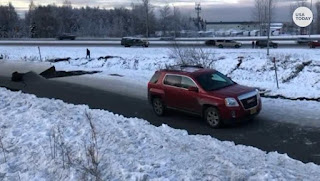