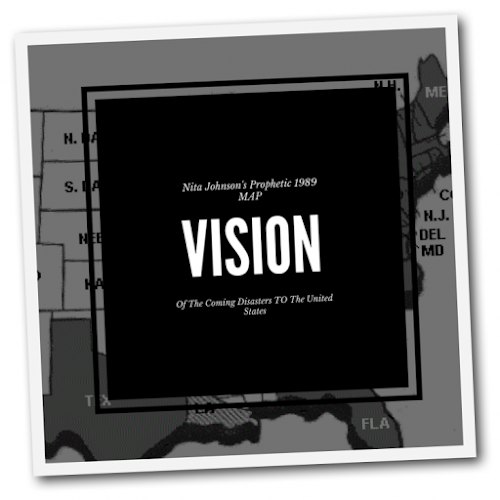 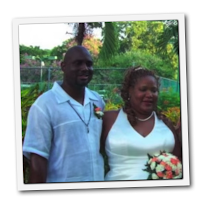 In this vision that was given to Nita back in 1989, seems to match up with what a lot of other prophetic voices have heard. Looking at the tsunami visions, and the New Madrid fault visions and dreams, and not to mention California and the whole west coast prophecies, it seems to me what Nita saw was pretty accurate.  She mentions in her vision that she does not know WHY certain areas on the map in black “disappear”, and it isn’t necessary that they fall into the ocean, she says.  That part of the vision was not revealed. Scroll to the end of the post to find Nita’s website, along with many of her other prophecies over the years. 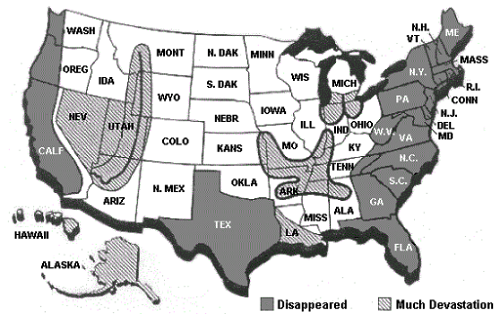 The Vision: On January 27, 1989, I had been in a spirit of prayer all night and was finally just starting to dose off to sleep. Suddenly, I was fully awakened by a vision of a map of the United States. It was not a vision in my head but was what some call an open vision out in front of me.

The map was in a silvery light and was completely sectioned off into states. just as suddenly as it had appeared, I heard a voice, as robust as the sound of many waters yet with great intensity, begin to give directions.

Starting with the West Coast, the voice would speak and that same silvery light would shoot down from the direction of heaven like a laser beam onto the map. The light would follow the path directed by the voice and then effects would follow as I will explain. First, the voice cried out-‘The West Coast, California, Oregon and Washington, starting from the southern most tip all the way up to Seattle, will suffer natural disasters, such as earthquakes, floods and fire, and enemy attack. “The line shot up the map taking most of California and leaving only a small section that bordered on Arizona and Nevada. It went up through Oregon taking about half of that state and then on up through Washington, taking about one-third of that state, then out toward the ocean through Seattle. The minute the line touched Seattle, everything west of the line disappeared.

The voice then cried out, “Michigan, Indiana, Ohio, and Illinois will suffer natural disasters, such as floods, earthquakes and tornadoes, and enemy attack. Immediately, this line started at about where Lansing, Michigan, is and fanned down in what became two lines going south first. Then one line swung back up easterly through Ohio, going out over the Great Lake Erie through Cleveland. The other line swung down through Indiana and then headed back up northwesterly and went out into the Great Lake Michigan up by the way of the northeast corner of Illinois and out through Chicago. When it was done, it looked like two “u”s side by side. This affected areas all through the region, for instance, as far east as Detroit and easterly in Michigan to the Great Lake itself on the west. The whole southern part of the glove experienced cataclysmic results.

Next, the voice called out, “Most of Louisiana and all of Texas will suffer natural disasters, floods, hurricanes, tornadoes, and enemy attack. “The line shot up through New Orleans east of Baton Rouge, up through Shreveport in a kind of wiggly way then cut off all of Texas. Texas disappeared. Louisiana experienced devastation but didn’t disappear.

I was ready for this to end, yet the Lord continued.- New York down through Pennsylvania, the Virginias, the eastern Part of Tennessee, Georgia, and Florida will suffer natural disasters of every kind, hurricanes, flooding, earthquakes, etc. and enemy attack. Then everything that was east of the line disappeared.

The Lord continued, “The Grand Canyon will suffer natural disasters. “The line seemed to start at the bottom of the Grand Canyon heading northerly straight up to Montana through Yellowstone. This was also accompanied by cataclysmic disasters like floods, earthquakes, volcanoes, and fires. This affected a substantial area, including Arizona, Utah, western parts of Wyoming, the eastern tip of Idaho and southwestern part of Montana. The regions did not disappear, but experienced utter catastrophe.

Then Missouri, Mississippi, Arkansas, Alabama, West Tennessee, Kentucky, and on it went. There were severe heat waves, hailstorms, energy blackouts, severe snow and ice storms as well as extreme arctic cold spells to the loss of many lives. I saw it so often occur in some the least likely areas. Famines, pestilence, plagues, and more.

Nevada and Utah were all but destroyed through natural disasters of every kind and ultimately enemy attack. They did, however, remain on the map (Please note that I am not declaring that the states that disappeared fell off into the sea. I don’t know why they disappeared, only that they did. Consequently, I am merely relating what I saw-not trying to interpret.) [Uninhabitable, or inhabited by invaders]

I was so dumbstruck that I felt numb, even bruised. It was hard for me to pull it all together in my mind. I just sat there in shock. Finally, I realized if I didn’t write it down, I’d lose a lot of it as there was so much detail. So I wrote what I could remember. Some states, such as New Mexico, were lost from my memory. I couldn’t remember what happened to them, so I didn’t record it.

I distinctly remember, however, that the only part of the US that was not devastated was the Central United States, a region basically west of the Missouri River, as I have indicated on the map. I also realized that many of the things that would begin happening immediately would be of an unusual nature, such as natural disasters that would seem improbable or even impossible, at least for that particular geographical area.

I was instructed that this sequence of events would start immediately, picking up momentum with time until eventually the succession would be happening with gunshot rapidity, until all fulfilled. It’s important to understand that the natural disasters did not specifically follow “the lines”, but the lines seemed to indicate the borders of the severely affected areas. The only one exception was the line that went up through the Grand Canyon north to Montana. In that case, the line seemed to symbolize the central core of action with a radiating aftermath both to the east and west. I saw natural disasters in Alaska and the Hawaiian Islands followed by warheads.

Finally, I saw a severe diminishing of our nation’s military. Officers, and enlisted men, as well as the closing of many critical bases were part of the scenario. Our ability to defend ourselves was critically reduced, to a point of near ineffectiveness. (The Military cut down was not incorporated in this vision, but was seen many years ago.)

These disasters have already begun, just as He said they would. Since that vision, there have been two earthquakes in California, terrible fires, a hurricane on the East Coast that did what all the meteorologists said could never happen. The storm entered inland through Charleston, South Carolina, went north and headed back into the ocean through New York. Flooding for the first time in history was recorded in a community in northern Ohio resulting in unusual deaths. Most recently, there was an earthquake near the southern border of Missouri, and floods in the plains, and terrible disaster in Florida from tornados. Those are just a few instances, but hopefully, they’re enough to drive the point home. These things are neither freak accidents, as some would have you believe, nor are they just satanic humor on mankind. Church, please realize that the Lord commanded everything that I saw hit the map. He also told me it was part of the sequential calamities which are warnings ultimately leading to full judgment assigned to this country. They are like blinking red lights along the path of judgment-Go back! Stop! Repent! The end is at hand! Will you hear? Will you pray? How in His great mercy would He gladly stop or minimize catastrophe for His praying church!

I was awakened in the middle of the night. The Lord said to me, “Why do you think I gave you that vision of the United States?” I replied, “I don’t know, Lord, why did you?” He then responded, “A surrogate mother won’t work. Sarah could not be one to Ishmael. It’s not My way.” As I was pondering what that could possibly mean, He followed with, “Only what is born of faith can work.”

While the Lord gave birth to America’s liberty and planted in her bosom a hope, He promised to be her protective covering if she would meet His conditions. He did not give birth to this sinful and rebellious nation. Although He has given birth to His church, a nation within a nation, He did not give birth to this antagonistic entity we call America. It was the blood, sweat and tears of man that gave it birth. Humanists swam in the womb with this nation and humanists have helped give it birth. They have nurtured it, coddled it and flaunted it as the son of their pride”.

It was Sarah who wisely declared at last, “Cast out this bondwoman and her son, for the son of this bondwoman shall not be heir with my son!” However, while this is true, Abraham suffered over releasing Ishmael and sending him away. Even so, our Eternal Father suffers over the future of the people of America. He must cast away the rebellious but He does it with great pain. What America as a nation doesn’t understand is that we have been reaping the benefits of the churches inheritance for over two hundred years. While the church has not been the model bride anymore than Sarah had been a perfect wife, we the church are, nonetheless, God’s bride and the spiritual nation of Israel. So while the Lord loves His “spiritual Israel” (the church) and although He must even chastise His elect, He will cast out the irreverent Ishmael (The United States). Though God loves man, He hates sin and will cast out from the inheritance those that choose to serve sin. For these it might be said; He has little regard. May we also remember it was not God who first rejected America. Although He has stretched His arms out to us, we are the ones who have refused Him. So, fear not Church, that which is born of Earth will stand. God has in His judgment remembered mercy. What I’m about to share is the way in which God is going to, in effect, cast out this rebellious America Ha calls Ishmael. The process will begin while the church is still here. In fact, it has already begun and will continue until all is fully executed I want to add one more thing before I share the vision the Bible tells us:

And if you say in your [minds and] hearts, How shall we know which words the Lord has not spoken? When a prophet speaks in the name of the Lord, if the word does not come to pass or prove true, that is a word which the Lord has not spoken. The prophet has spoken it presumptuously; you shall not be afraid of him. (Deut 18:21 & 22) So we are to judge the word which is spoken in the Lord’s name by waiting to see if it comes to pass. If it does, we need to believe it and respond to God’s warnings through it.
Posted by Omega Ministry Service Centre at 20:49