Miraculous Prophecies in the Bible


Statistically, there are 1817 prophecies in the Bible. 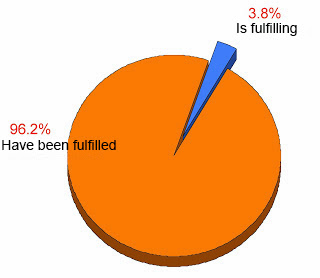 Prophecies to nations
In the six century B.C. when the Babylon Empire was at its golden age, the prophet Daniel ever foretold countries that will rise after the Babylon Empire:
The king of Babylon dreamed the huge statue, and Daniel interpreted the dream for him.

Prophecies for Christians
The biography of each great person of history documents the review of their life with no exception, however only the life of Jesus Christ has been written down before His birth. 320 prophecies about Him in the Bible have been all fulfilled.
The prophecies testify not only that the Bible is the revelation from God, but also that Jesus Christ is the Messiah God sends to us. He follows God’s will to become the sin offering for all mankind, so that anyone who believes and accepts Him will be forgiven and will be reconciled with God.

“Salvation is found in no one else, for there is no other name under heaven given to mankind by which we must be saved.” (Acts 4:12)

Prophecies About the End Time in the Bible
Seventy seven years in the Bible (Dan 9:24-27, 538 B.C)
Daniel 9:24-27 ““Seventy ‘sevens’ are decreed for your people and your holy city to finish transgression, to put an end to sin, to atone for wickedness, to bring in everlasting righteousness, to seal up vision and prophecy and to anoint the Most Holy Place.
“Know and understand this: From the time the word goes out to restore and rebuild Jerusalem until the Anointed One, the ruler, comes, there will be seven ‘sevens,’ and sixty-two ‘sevens.’ It will be rebuilt with streets and a trench, but in times of trouble. After the sixty-two ‘sevens,’ the Anointed One will be put to death and will have nothing. The people of the ruler who will come will destroy the city and the sanctuary. The end will come like a flood: War will continue until the end, and desolations have been decreed. He will confirm a covenant with many for one ‘seven.’ In the middle of the ‘seven’ he will put an end to sacrifice and offering. And at the temple he will set up an abomination that causes desolation, until the end that is decreed is poured out on him.””

There are four phases in seventy seven years:

Let’s study in the New Testament that which day the anointed king will come up. The LORD has shown up in public only once, and he has formally recognized Himself as the Messiah of Israel. That’s the day when He entered Jerusalem by riding the donkey, and it is also called Palm Sunday.

After the sixty nine sevens, Roman General Titus occupied Jerusalem in 70 A.D, and the Holy Temple was destroyed. This obviously fulfilled the partial prophecy. What is written in Dan. 9:27 was not fulfilled on Titus. Instead it would be like what Jesus says in Mat. 24:15, He cited Dan. 8:9-24 that “So when you see standing in the holy place ‘the abomination that causes desolation,’ spoken of through the prophet Daniel.” What the Scripture says is about the antichrist shown up in the big disaster of the end days. It is also the ruler mentioned in Dan. 7:23-26, and the man of lawlessness in 2 Thessalonians 2:3-9. If the antichrist wants to stop sacrifice and offering, the mandatory condition is that the Holy Temple must exist. However the Holy Temple in the prophecy has been destroyed, so it is not possible that the seventieth seven is right next to the sixty ninth seven.

Nevertheless, if the seventieth seven is closely next to the sixty ninth seven, the prophecy in the Scripture “to put an end to sin, to atone for wickedness, to bring in everlasting righteousness, to seal up vision and prophecy and to anoint the Most Holy Place.” should have been fulfilled. However, in reality, Israel has not been redeemed, and Jesus Christ also has not been anointed as the formal King Messiah. This will be not fulfilled until His second coming.

The best explanation is that it is the era of grace of church between the sixty ninth seven and the seventieth seven. It is the mystery of God which is unknown to the Saints and prophets in the Old Testament, because the mystery has been kept hidden to them.

The Prophecy of the End Times. 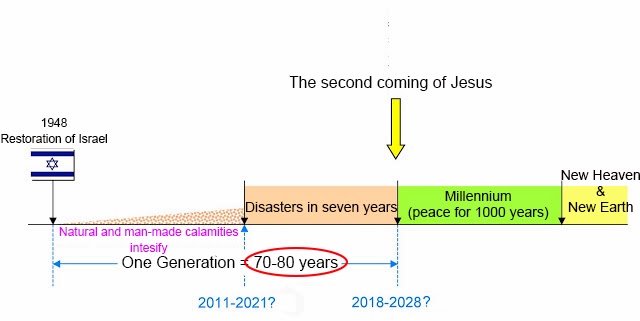 Mat. 24:32-34
(Jesus says) ““Now learn this lesson from the fig tree: As soon as its twigs get tender and its leaves come out, you know that summer is near. Even so, when you see all these things, you know that it is near, right at the door. Truly I tell you, this generation will certainly not pass away until all these things have happened.”

Psm 90:10
“Our days may come to seventy years,
or eighty, if our strength endures;
yet the best of them are but trouble and sorrow,
for they quickly pass, and we fly away.”