August 16 2013, when I was praying in the afternoon
I was praying for a sister far away in Hong Kong whose life is in danger.  A vision came into the prayer. One spokesman with a black suit was speaking on the stage with a long talk. Because I was concentrating on the prayer of the sister who is ill and was expecting God to talk about her disease, I cannot even listen to one word of that man’s English. Nevertheless he was still existing.  After a while, suddenly there’s a boy’s voice like rushing water coming out of the spirit world and the voice covered the whole picture, saying “Russia has an accident.”  All of a sudden, I realized and woke up with alert.
Impression: Around in October, Russia will have a major event, but I don’t know in which year. 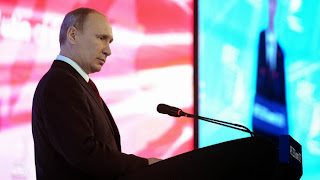 2013.10.07  Putin seeks to boost trade with China to new record $100bn
http://rt.com/business/russia-china-trade-record-836
2013.10.15Russia detains scores of migrants after riot
Authorities round up about 1,600 people after nationalists rioted over murder blamed on foreigner.