The Plague of Frogs, Gnats, and Flies


The Book of Manuscripts 6:12-14:
"The fish of the river died in the polluted waters; worms, insects and reptiles sprang up from the Earth in huge numbers." 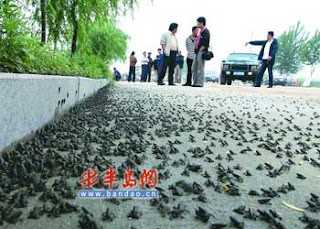 According with scientific view

The perceptive function of animals is different from men, The exports found that many wild animals and livestock have abnormal behaviour before earthquake though lots of studies. They felt nervousness, irritability, anxiety, jumping and fling without control, in the other hand some of them was doldrums. Including Bats, frogs, gecko, carp, loach, rats, rabbits, bees, ants, snail, foxes, deer, goose, pigeon, crow, chickens, ducks, pigs, sheep, dogs, horses, and donkeys almost thirty kinds of animals have abnormal behaviour before earthquake. Among them cryptozoa animals were more sensitive like rats, gecko, rabbits and ants, for they lived in the cave, or maybe they had special awareness.

Why the wild animals and livestock have such unusual behaviour before earthquake. The expects said the fortified geostress caused sound, light, electricity, magnetic, thermal, etc. changes on physical and chemical in particular scope before earthquake. The imperceptible changes influenced animal’s physical sense. However we human beings can not get the special sense.

The Plague of Livestock


The Book of Manuscript 6 :12 "Wild beasts, afflicted with torments under the lashing sand and ashes, came out of their lairs in the wastelands and caveplaces and stalked the abodes of men. All the tame beasts whimpered and the land was filled with the cries of sheep and moans of cattle."

These rocks from outer-space brought radiation or terrible virus to earth. When arsenic and cyanide toxins hit atmosphere then fall to the ground or water, people would sick by that radiation, arsenic or terrible virus, even die.

By this situation, these livestock used to drink by the rive which was filled by dead body and flies. Of course it caused terrible plague.

The Plague of Boils


How to record it by Egyptian pharaohs?

Manuscrip 6:12 "The dust tore wounds in the skin of man and beast." 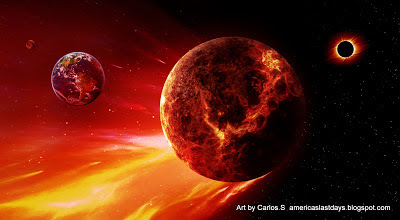 There was lots of red dust on Planet X, when it passed though earth's magnetic field, the red dust would attract into atmosphere. That dust turned the overall atmosphere into red, even gave rise to the deep volcanic eruptions made the red ash spewed from the ground. These red ashes from volcanic explosion made skin more sensitive ever made skin fester. While this terrible disaster arrived, plague spread over the ground that created epidemic and tore wounds in the skin of man. However no Israelites suffered these terrible plague or livestock dead. Because of the almighty God healed them with transnatural power.

The Plague of Hail


Book of Manuscript 6:13-14
The face of the land was battered and devastated by a hail of stones which smashed down all that stood in the path of the torrent. They swept down in hot showers, and strange flowing fire ran along the ground in their wake.
Great gusts of wind brought swarms of locusts which covered the sky. As the Destroyer flung itself through the Heavens, it blew great gusts of cinders across the face of the land.

Before the plague of hail sun changed its color frequently. A planet named Destroyer like sun appeared in sky always changed its image with the influence of gravity change of the atmosphere. After that lot of aerolites from “Destoryer” was burning in the sky. The hail and the flame of meteorites mingled and fell into the land of Egypt.

There was lots of red dust on Planet X, when it passed though earth's magnetic field, the red dust would attract into atmosphere. That dust turned the overall atmosphere into red, even gave rise to the deep volcanic eruptions made the red ash spewed from the ground.

After it reached into raining water the red dust mixed with red hailstone. When the hailstone fell down with meteor shower from Planet X, There came sulphur fire mixed with blood hailstone.

A Moroccan farmer got the shock of his life when a giant snowball fell to earth leaving a half metre hole in his land. The farmer from the Hrira region split the ice and put it in his fridge to prevent it melting. Local authorities then sent a team of scientists who confirmed that it was in fact a 'mega meteor' from space.

February 1, 2013 – INDIA
Hailstones the size of boulders have rained down on villages in southern India.
http://theextinctionprotocol.wordpress.com/2013/02/01/nine-people-killed-as-freak-hailstorm-rains-ice-boulders-on-indian-villages/ 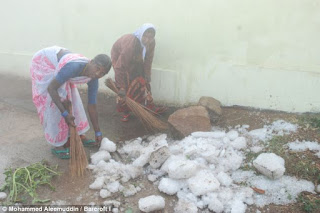 The Plague of Locusts

Book of Manuscript 6:14
"Great gusts of wind brought swarms of locusts which covered the sky. As the Destroyer flung itself through the Heavens, it blew great gusts of cinders across the face of the land. The gloom of a long night spread a dark mantle of blackness which extinguished every ray of light." 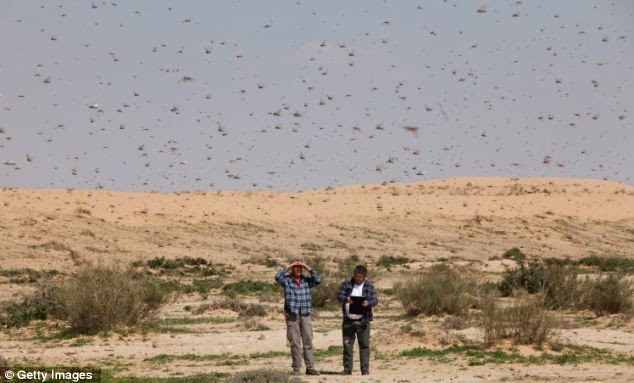 Recently large number of locusts crossed the Egyptian border into Israel. People worried about these insects would trigger a locust plague in the country. In the Negev Desert near the Egyptian boundary, on the ground of Catalogne village of Israel was full of locusts. A swarm of locusts flied to the border of Egypt near Israel. Lots of locusts had hanging on the branches. I t is estimated about 30 million locusts had make a great damage for the crops in Egypt. The Israel authorities were alert to the plague. About 1million locusts invaded Israel.

Huge number of locusts flied across the boundary of Egypt into Israel near Kadeshbarnea of Jerusalem. The government of Israel said about 2,000 acres of desert were covered by locusts overnight.

People used to chase locusts out by black smoke from burning tires in Caro. It was reported the locusts in a swarm had been found at least three villages in Zafar Rana (about 124 miles from Caro), the red sea and Kenner. The first level of administrative division includes 27 provinces and the heaviest plague of locusts caused a significant agricultural lost in 15 provinces in Egpyt.

The plague of darkness

Manuscripts 6:14:
"The gloom of a long night spread a dark mantle of blackness which extinguished every ray of light. None knew when it was day and when it wasnight, for the sun cast no shadow.

Manuscripts chapter 6
The darkness was not the clean blackness of night, but a thick darkness in which the breath of men was stopped in their throats. Men gasped in a hot cloud of vapour which enveloped all the land and snuffed out all lamps and fires. Men were benumbed and lay moaning in their beds. None spoke to another or took food, for they were overwhelmed with despair. Ships were sucked away from their moorings and destroyed in great whirlpools. It was a time of undoing."

The plague of darkness was not the imagination of human thought which sun and starts covered by dust. According to Kolbrin Bible it was mentioned they cannot light the lamps. May be there was another great quality planet

What caused this happened “all lamps and fires were snuffed out. Men were benumbed and lay moaning in their beds. None spoke to another or took food”. The most likely was the lack of oxygen, people was unable to get up, speak or eat, even cannot light the lamps.

(To be continued….)
Posted by Omega Ministry Service Centre at 16:45