The FULFILLED PROPHECY: Big Storms and Earthquakes after April 2014 (Global Prophecy of 2013, No 14)

I saw again the previous same vision, and I was curious that the vision would “replay” two weeks later. That must be because there is something I still don’t understand, but why?

Now comes a black bear walking on the ice sheet. After a while, it finally went onto the ocean, but where on earth would it go?

A typhoon (frankenstorm) showed up on a place where the population is pretty sparse (on the North Pacific Ocean. I had a bird’s eye view to look down from the sky.) It went through the ocean and was getting bigger and stronger. It created wind speed from 200km/h up to 300km/h and caused storm surge (I had no idea whether it is in 2014 or in 2015). After September, another frankenstorm will visit South Asia and South America and cause calamities.

On December 3rd, 2013, I woke up again in the early morning, and the previous same vision emerged again. A living movie was projected right before me. I saw flood coming down from the sky, destroying a short-distanced bridge and balustrades. The flood carries mud, debris, tempestuously surging forward. I asked the LORD “where on earth is that?”

I saw an irregular huge water tank, and its bottom was tilted. Some place was rent, and the earthquakes also happened in Chile of South America, Indonesia, and Solomon Islands. The most parts of the bottom of the huge tank were starting to rise and water in the tank was spilt out. This was not an average huge tank; however this was the relief map of the bottom of the Pacific Ocean. The seawater can just go up to the shore, causing huge waves hundred meters high.

An island was sinking and disappearing on the Earth. It was cast into the ocean. (I knew in my spirit that this country is the Tribe of Dan which will disappear in the future.)

Somewhere else also had an earthquake, and it was around the region in the Atlantic Ocean where is close to Europe.

A city which has a statue with one hand holding a torch also came across the storm, and it was under water. In my spirit, I heard a voice saying, “Come out of her, my people.” Was this not the Scripture in the Bible?

Impression: This vision is describing the continuous calamities which will begin from April of the next year, and from September of the next year to September, October of 2015. After 2015, calamities will intensify more, and typhoons frequently appear on the North Pacific Ocean. In the south, high magnitude earthquakes will happen in Chile of South America, Indonesia, and Solomon Islands, as well as the place around the Atlantic Ocean where is close to Europe. The terrain of the Pacific Ocean will rend and the terrain will rise, causing a big scale of tsunami and seawater intrusion in the coastal areas.
Chile :
8.3 Earthquake Hits Just Off the Coast of Chile Apr 1, 2014 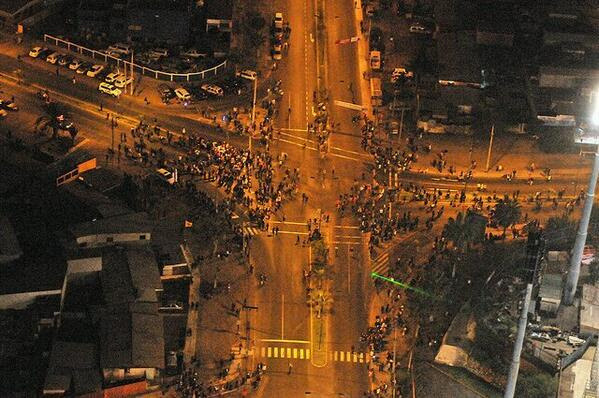 Chile quake: This was big but a bigger one awaits, scientist says CNN, April 2, 2014