Global Prophecy No. 18: Prayer for Israel

A dream in the early morning on June 24, 2014
I saw a great war which will happen in the future. The war took place unexpectedly and the well-ordered city became empty. There were armed troops all around the streets. There was only chaos and clamor everywhere in the city.  Power plants were almost shut down and electricity could only be supplied in few areas.

Prayer for Israel--- The Firstborn of God
A prayer in the evening on August 9, 2014 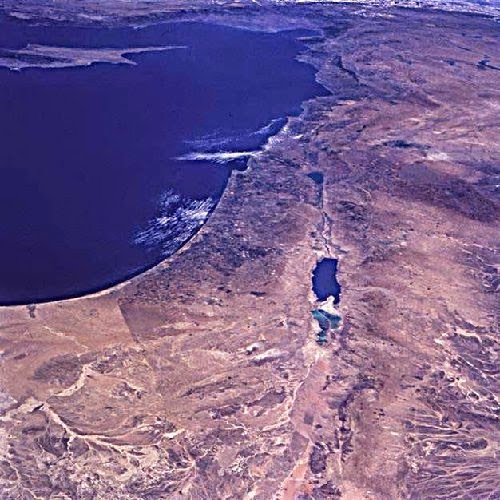 Two sisters and I knelt down in their house to pray together. I asked God the relationship between Israel and Omega Ministry, because the Heavenly Father came to my dream half month ago to ask me that "Have you cared about Israel?" I kept the word in my mind and couldn't get over it for a long time. My Lord cares about Israel, for that's His firstborn. His will for Israel has never been changed. I am willing to be obedient to God's will in everything. That's why it's so important to understand how Israel and Omega Ministry will be linked.

In the vision, I saw a naval ship and
a giant squid, which is much bigger than the ship, coming down from the heaven. It wrapped around the naval ship, which then moved bumpily and  wallowed in the sea. The land of Israel was suddenly shrouded by darkness. The grey concrete floor was rolled up and then smashed up...... There were blue light coming out of two tunnels from Omega Ministry to the underground of Israel. God's spirit showed me the details of works of Omega Ministry with Israel in the end times......  Several state-of-the-art fighter aircrafts showed up and flew low from the periphery into Israel whose sky was dark then......

In the sky, there was a lake coming out witch was azure blue and translucent like a crystal jewel. The lake was expanding and getting bigger and bigger. Curtain-like Clouds were also drawn apart by the lake. Among the blue light, a giant teardrop dropped from the heaven on the land of Israel. My heart was suddenly filled with tearing sensation and my body was trembling and shivering fiercely, and it's so grieved that I recalled the pain of losing my son. I suddenly bursted into tears and could not stop it. Some feeling and grief stirred in my heart consistently. I wondered about what happened to me. More and more sorrow came out of both the inside and the outside. It's amazing to be struck by emotions without warning. Obviously, I can figure out that the feeling and tears are not because of my sufferings. There was even no transition and then the anguish which doesn't originate from me came into my mind.

The little voice of the Holy Spirit struck in my mind, saying, "I will make you realize God's will for Israel."  Then, the sound similar to landslide went off, and there was Heavenly Father's words, "It's the dark period of Israel, and I permit it to happen. (In my vision, Israel was covered with darkness and the dark mist shrouded the sky of Israel.) I deliver my firstborn son into the enemy's hand to fulfill my will in the end times. I allow my enemy to drink his blood and cut his body. (Father's heart is torn piece by piece.) I allow my angels to retreat out of that place. (There's a receiving from the Lord in 2011 that all the angels will retreat from Israel.) I withdraw protection and hedges.

Heavenly Father's eyes looked away, and that's the scene of crucifixion of Jesus. Matt. 27:45-46, "From noon until three in the afternoon darkness came over all the land. About three in the afternoon Jesus cried out in a loud voice, “Eli, Eli, lema sabachthani?” (which means “My God, my God, why have you forsaken me?”)."
After I saw the above vision, a big shock and sadness continuously gushed out of my mind.

Suddenly, I thought of one thing which is when Abraham was on his way to sacrifice Isaac, had Abraham ever thought that his son will die on the altar, however, he still chose to be willing, because he sacrificed him to the Lord. Do realize your parents' pain? That's the pain of losing their beloved child. Heavenly Father's will for Israel is for many souls who are unworthy of.

Isaiah 40:1-2, "Comfort, comfort my people, says your God. Speak tenderly to Jerusalem, and proclaim to her that her hard service has been completed, that her sin has been paid for, that she has received from the Lord’s hand double for all her sins."

Psalm 122:6-8, "Pray for the peace of Jerusalem: “May those who love you be secure. May there be peace within your walls and security within your citadels.” For the sake of my family and friends, I will say, “Peace be within you.”

Lord, you are a compassionate and gracious God, slow to anger, abounding in love and faithfulness. You say if your people humble themselves and seek your face, you will hear their cry before you. Lord! Now they are wailing and mourning at the Wailing Wall. They are persecuted on every side and will suffer intensely. Lord, in keeping with your promise in Isaiah 60:10-22,

"Foreigners will rebuild your walls, and their kings will serve you. Though in anger I struck you, in favor I will show you compassion. Your gates will always stand open, they will never be shut, day or night, so that people may bring you the wealth of the nations— their kings led in triumphal procession. For the nation or kingdom that will not serve you will perish; it will be utterly ruined. “The glory of Lebanon will come to you, the juniper, the fir and the cypress together, to adorn my sanctuary; and I will glorify the place for my feet. The children of your oppressors will come bowing before you; all who despise you will bow down at your feet and will call you the City of the Lord, Zion of the Holy One of Israel. “Although you have been forsaken and hated, with no one traveling through, I will make you the everlasting pride and the joy of all generations. You will drink the milk of nations and be nursed at royal breasts. Then you will know that I, the Lord, am your Savior, your Redeemer, the Mighty One of Jacob. Instead of bronze I will bring you gold, and silver in place of iron. Instead of wood I will bring you bronze, and iron in place of stones. I will make peace your governor and well-being your ruler. No longer will violence be heard in your land, nor ruin or destruction within your borders, but you will call your walls Salvation and your gates Praise. The sun will no more be your light by day, nor will the brightness of the moon shine on you, for the Lord will be your everlasting light, and your God will be your glory. Your sun will never set again, and your moon will wane no more; the Lord will be your everlasting light, and your days of sorrow will end. Then all your people will be righteous and they will possess the land forever. They are the shoot I have planted, the work of my hands, for the display of my splendor. The least of you will become a thousand, the smallest a mighty nation. I am the Lord; in its time I will do this swiftly."
and according to your great love, please stretch your powerful arm to forgive people's sins as you usually forgive them from the times in Egypt till now.

Numbers 14:19, " In accordance with your great love, forgive the sin of these people, just as you have pardoned them from the time they left Egypt until now."