Sharing the Book of Revelation according to God's Guidance 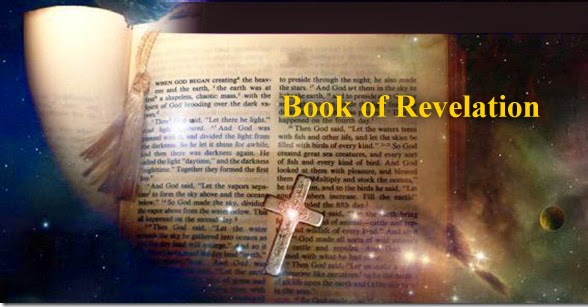 From what I could recall, it must at the end of September 2012 or approaching October, was when I had this vision in my dream. I could not know the exact since I didn’t note it down. In my dream, I saw a Christian brother. From where I was sitting, I could vaguely make out his figure and not entirely his face. It appears to me that he has clearly undergone some professional spiritual training. He was speaking to a congregation of a hundred on the book of Revelation. I noticed after listening to him that most of the crowd were seated on the ground. I felt that those souls are busy running after their own lives on earth, many among them cannot rest. However, their eyes are filled with hunger for God’s words.

After he was done, a voice came from another realm, "he does not understand completely, for he has only spoken of half of Revelation." I thought to myself in perplexity because it seemed to me completely that he has spoken very well, and his blue clothes blown by the wind as he spoke. I watched as, the brother started to collect his Bible from the ground, and picked up his stool to the next place. This time, it was clearly somewhere in the outskirts. He seated himself again and was ready to speak to the other group. The people in the crowd are seemed even hungrier for teachings than the previous. At this time, a spirited being came upon that place. I could not define its figure clearly, but it was extremely gentle in nature and had shined a warm light. This warm light casted out all the cold morning air in the wilderness in that place. Now, the same voice that was sounding before started again, “He is only telling half of what’s there in the book of Revelation, he does not understand completely.” I became more confused, thinking again to myself that the brother has spoken very well. The spiritual being came beside me and whispered, "Go tell him: he knows not completely, but only knows half of what’s there." I almost jumped, and thought, “How dare I tell him of that, he seems to have undergone a lot of gospel training, who else besides him can teach this? And who am I to tell him that, when myself, do not even understand the Book of revelation to the fullest?” Again now, the same voice sounded from above, “You go and tell him about the other half of the Book.” I was quick to reply, “How would I know the other half as well, unless if the Holy Spirit reveals it to me.” All of sudden my spirit awakened, a thought came which made me excited. Could this be not the Holy Spirit himself speaking to me! The spirit then shone a light, “I will reveal to you the other half of Revelation. Go forth and speak, the Holy Spirit will guide you to what you need to know.” I felt myself submitting to the Spirit. Then I was drowned in my thoughts and the warmth of the environment, thinking whether I should approach him or not, I woke up.

Not long after I have had this vision, a pastor by the name of Gan called me from China. He told me while he was travelling in the province of ShenYang, God has opened a way for him, and when he was meeting the pastors there in that province (there were about a hundred of them), the Holy Spirit came upon him and asked him to share Revelation. One of the pastors that he also met there brought him to a village in the outskirts to also share Bible messages. He was moved by the hunger that he saw in people. As he was preaching that day, even before when he was finished sharing, many among them started to repent before God. The Holy Spirit has done tremendous work in that place, people broke into tears, and many have had miracles and testimonies on them. It was after he had seen that in the people that he decided to also share the book of Revelation. After he had heard about my vision, he shared with me his experience in China, and I knew immediately that it was him the person I saw in my dream. I know now that he is indeed an excellent speaker as I learned he’s gone through training in a Bible college.

At the same time, I was touched by the Holy Spirit as well in Toronto. So I started sharing the book of Revelation with my colleagues here at Omega Ministry. Praise the Lord for everything because we were touched by the Holy Spirit to gather. Using Internet and emails, Pastor Gan shared with me his messages through Powerpoint documents. Every time I received an email, I would ask God to help me put these messages into a sermon to his people. Miraculously, the Holy Spirit guided me to gather more information that could help me in my research, He’s opened windows to areas in which I had no knowledge before. For example, as I came across the book on the plagues of the seven seals, seven trumpets and seven bowls, the Holy Spirit said to me: “draw in comparison of these to the ten plagues of Egypt, so the secrets of the kingdom of God may be revealed to you.” So I began writing down what I receive from the Holy Spirit, and made it all into a Powerpoint. Shortly after I had done so, an email from the brother confirmed my understanding, as it entailed a history of Egypt based on the story of Moses, the article was written from the point of view of a Pharaoh. Praise the Holy Spirit because it occurred to me before to have anything written on that. It is the Holy Spirit himself working! Gradually, we were able to document all of our notes into sermon messages, praise God for His revelation to us.

Narrated by EC, Compiled by CT, Translated by JS
Posted by Omega Ministry Service Centre at 17:49