The comparison between the disaster in REVELATION and in Egypt -- Part 1: Water turn to blood red 1


The record of ten disaster from Egyptian’s point

Accord with The Book of Manuscripts in Kolbrin bible

God punish Egypt and pharaohs by ten disaster, in order to force him release the Israelite。By doing this, aiming to challenge the ten false god the Egyptian often worshiped.

If the ten disaster recorded by Israel is impartial, its better to contrast it with the Kolbrin Bible, which is recorded in the views of Egyptian. At that time, they are victim.

According to the records, Kolbrin Bible is composed by ten sets of Bronze Book. In the beginning, it was collected in cloister of Glastonbury, which is called the first church in European. It is said that, the church was build in 63 AD, before more than 1950 years ago, by Joseph of Arimathea, who buried Jesus.

Luke chapter23:50-53
"now there was a man named Joseph, a member of the council, a good and upright man. who had not consented to their decision and action. He came from the Judean town of Arimathea and he was waiting for the kingdom of God .going to Pilate, he asked for Jesus’ body. Then he took it down, wrapped it in linen cloth and placed it in a tomb cut in the rock, one in which no one had yet been laid."

Later, a fire in 1184 nearly destroyed the Glastonbury cloister, the king of the united kingdom Edward I collected the left five books of kolbrin bible . 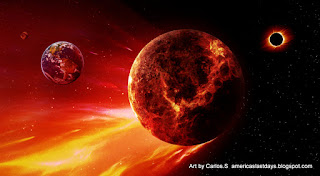 In the Kolbrin bible ,The Book of Manuscripts recorded the flood in Genesis and the ten disasters in Exodus, even recorded the disappear of the legendary Atlantis. All of this are due to a star’s approach named Destroyer. Kolbrin Bible wrote in 3500 years ago, but it very match the modern knowledge. In fact, as the current information we know, all of the content can’t be fairy tale. The Book of Manuscripts in Kolbrin bible is a testimony. It clearly recorded the things will happen when the Destroyer(Nibiru) —— Planet X came. we are expected to read their history and compare it with the bible. we will find that in the book, it has more clearly record about ten disasters, which can prove that the ten disasters are really true, and how the Egyptians thought about this.

Seemly, we know that what Kolbrin Bible recorded is true, because it is recorded by the Egyptian from the different views and the event of exodus from Egyptian’s point; it also explained the reason of the ten disasters. At the end of the book, it even warns that the planet X (Nibiru) will come in 3600 years. Even In a non-Christian country, Egypt has proved what bible said is true. they write Kolbrin Bible even they hate Jewish.


Chapter 3:3 read, before Planet X's coming, the sky will show as the Revelation described.
(Manuscripts 3:3)
"When ages pass, certain laws operate upon the stars in the Heavens. Their ways change, there is movement and restlessness, they are no longer constant and a great light appears redly in the skies."

According to the documents from the Sumer, flood in Noah’s time was due to the plant Nibiru’s coming; along with it are kinds of disasters. Sumer put, Nibiru (Plant X) is a start passing by, which is a red and dim one. When it came to the earth, it seems like a rolling dragon.

According to the documents from the Sumer, flood in Noah’s time was due to the plant Nibiru’s coming; along with it are kinds of disasters. Sumer put, Nibiru (Plant X) is a start passing by, which is a red and dim one. When it came to the earth, it seems like a rolling dragon.

The wormwood described in bible


(Manuscripts 3:4)
"When blood [the red ash] drops upon the Earth the DESTROYER [Nibiru] will appear and mountains will open up and belch forth fire and ashes. Trees will be destroyed and all living things engulfed. Waters will be swallowed up by the land and the seas will boil."


In the whole paragraph of chapter6 in Manuscripts of the Kolbrin Bible, and the section 11,12,14 of the chapter 6 :

"Dust and smoke make the cloud dim and dark, it also make the water into red when it dropped on the surface of the water . plague were everywhere, river was like blood, bloodstain covered corners, the red ash combined with water, the water become dirty, people who drank it, stomach will shrunk, and emesis. Fishes in the water died." That the history in Egypt.

When Egyptian saw Moses and Aaron are going to leading Israel away from Egypt, they stroke the water with cane as Jehovah told, dust and smoke was suddenly show on earth, covering even every corners of the Egypt.

In The Book of Manuscripts, chapter3 section 6 put, people will hide in the cave, which is the bunker in the future. "The people will scatter in madness. They will hear the trumpet and battle cry of the Destroyer and will seek refuge in the den in the Earth. Terror will eat away their hearts and their courage will flow from them like water from a broken pitcher. They will be eaten up in the flames of wrath and consumed by the breath of the Destroyer."

Coincide with the sight of last day described in bible

Joel chapter 3 section 14 to 16
"Multitudes, multitudes in the valley of decision! for the day of the lord is near in the valley of decision. the sun and the moon will be darkened, and the stars no longer shine. the lord will roar from Zion and thunder from Jerusalem; the earth and the sky will tremble. but the lord will be a refuge for his people, a stronghold for the people of Israel."

In the chapter7:21 of the Silver Bough write, just as the Lord Jesus Christ said, the day he come again is like a thief, and people will into chaos, confused day is come. there will not be any sign to show any horrible person’s come. He will appear when we are not prepared , the time will be a chaos, and confused day.

At that time, Egypt is one of the four civilized ancient countries of the world, has a great knowledge in starts, which is next to Babylon the plant was show only seven days before it close to the earth. It was come from the southern hemisphere, so it can’t be seen in from the Egypt, which is in the north hemisphere.

“Water changed into blood” seems the first alarm before the big disaster. 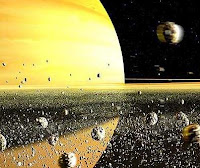 If a mass planet, with the help of its great gravitation, can make any small Breakstone be its satellite. Just as the Jupiter has dozens of satellites, and Saturn has Saturn’s ring, which is made by mount of breastbones. If Planet X is several times bigger than the earth, or it’s even times than Jupiter, it’s enough for it to magnetize mount of different size stones and satellites.

Before the phosphosiderite meterolite arriving the earth, it will burning into fireball and smashed into air. Explaining the ten disasters from a scientific point of view, it concluded that the first six disasters due to the fireball。

The reasons for the water changed into blood:

1. when the Planet X went closer to the earth, the phosphosiderite will explode into the air and its powder dropped into the water or mixed with the rain, as a result. The river will changed into the color of blood.

2. Planet X has a mighty gravity, which increase the energy of volcanoes and the volcanic explosion. When it erupt, the volcanic ash will raised from the volcano, float into cloud, and become rain ,so the rain will look like as red as blood.

As the bible say,”water change into blood” is the sign before the ten disasters, which is also the sign of the seven years disaster. As the unusual events has happened in different regions, we should notice that the most serious disaster ang the giant aster is coming.

Does this really happen? Yes 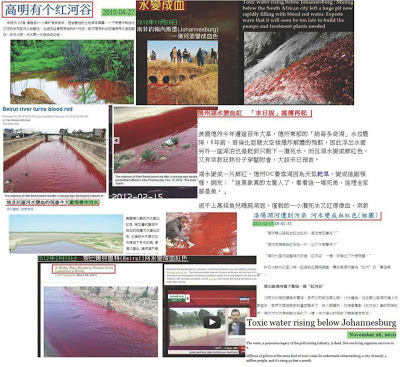