The Testimony of Looking for the Meeting Place, Part 2 --- 19 WATERMAN

In November 2012, we left 1029 McNicoll because the ministry which owned the place had sold out the real estate. Thanks the Lord, God has prepared a new place for them. We had ever went through joy and miracles in Christ together, for that reason, they invited us to have a meeting in their new place.

However when we prayed to ask God, He didn’t say anything and didn’t tell us to get together with them. He didn’t say where the location is as well. After such prayers, we were back to the original place to wait for God. Even though some staffs can’t realize and the members also can’t understand, we still obeyed to God’s will to move back to the original family house of meeting. Back to the start, we were trained again by God to look for the place.

When we rented the former place, God had already told us that we could just stay in 1029 McNicoll for just 3 months (from 2012.08 to 2012.10). We didn’t know why at first, but now we can realize that God wanted to bless the global ministry JESUS CALLS in both their prophecy and finance. Because of the linkage between us, JESUS CALLS also blessed OMEGA MINISTRY. Furthermore, a series of signs and wonders did happen to these two ministries.

Before leaving 1029 McNicoll, for the prophecy of staying for only 3 months, our staffs knew very well to pray for the next place. Most intercessors had the attitude of “early bird getting the worm,” so that around in August, the staffs were set to pray for the second new place. In my note, date August 4, there was such an answer from God which is about the problem of the second place, and He answered with a long dream.

We were having a meeting in the dream, and so many people were there. I suddenly saw a married couple whose names both starts with D (They had not attended our meeting for more than a year). The gentleman talked to me about the issue of childcare in the meeting. I could see in the dream a magazine, which had so many names and titles on its top left corner. And my husband asked me who made this magazine. Then one staff named JC was mentioned. I was sitting there to listen to a sermon, but I didn’t identify who the speaker was.

At the time of serving, many people were in a line, and I started to serve people and pray for them in the meeting. Meanwhile, the Holy Spirit began to talk to me: someone has tumor in the belly, someone has certain kind of illness, someone has homosexuality needed to be released, and someone whose hands and legs are deformed needs to be healed.

What’s so impressed to me in the dream was that there was such a long hallway outside the rooms and its color was closer to white. People were standing in the middle of the hallway. On the left were offices installed with glass doors. The partitions and glass doors looked like there are so many rooms which are separated. When I woke up from the dream, I knew there would be such placement in the new place. However I still didn’t know where exactly the location is, so I continued to pray to the Lord.

I quickly shared the receiving to the intercessors and asked them to pray for such thing. Thanks God! Every staff was willing to be obedient in God’s will. I asked a staff who was just home to help, and she searched the Internet with instinct. She listed possible 40 something places which were open to rent. Among so many places which one would be ours? I picked 10 places of them with my impression, and I put the address 19 Waterman in no. 1, however I didn’t pay much attention to that. On March 23 2013, God gave me a dream again. In the dream, we found a place which was owned by an organization. The place had no sublease, and it was clean and neat, and was also anointed. Activities in the place were immaculate in God’s eyes. I didn’t see any cockroach and ant at all. The walls were painted white which spiritually means it belongs to God. I checked the place for a while to see if there’s still anything good.

In the dream, I remembered that a sister’s shop is close to this place. One person called me in the dream, and said “The place (meeting place) she originally lived in was nice. You must go check out the place.” Then I went to her place, and the area of the place in the dream was almost the same with that in the real world. It was just a little bit smaller. In the dream, the pastors lived in a big hall which was separated into three different size rooms. (which means there would be three different units to use the same place for meeting.) Each of the rooms was divided very well, and each pastor never intercommunicated. I just felt the place was messy in the dream, and the painting was not completely white. Sometimes some cockroaches came out from corners and then came the ant. After I woke up, I asked God the meaning of the dream, and the consequence was that I will come across a person who provides us the place actively. So I continued to wait with patience.

In the beginning of April, one pastor of a church did give me a call, and said “It’s heard you’re looking for the place. I also had a dream and received from God. I would like to assist you and make you use our place.” However, because of the dream I had, I knew right away that God didn’t say the place is suitable for us, instead I thought the place I originally saw on the Internet should be better. So I didn’t reply her positively and said “I know God has his will in this place, however I should still pray and ask God to get the best of God’s will. What you offer is good, I think I should seek God again though. 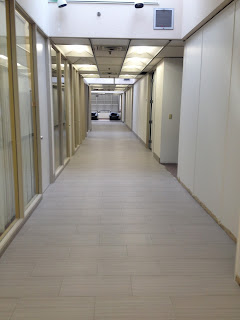 On Sunday April 3, my staffs and I made appointments to see the first three places. The first one on the list was 19 Waterman, and we had already made appointments for the next listed two places, but no first one. Before we hit the road, I asked the staffs that “Could it be possible that we go to the first place, even though we haven’t made an appointment with them. It would be better that we don’t waste any time.” Then the staff said “We didn’t make an appointment with them. What if we cannot see anything?” I said “If the place was prepared by God for us, everything we do will be smooth without any block.” It’s amazing that when we arrived the first place, all the doors were unlocked, and we went upstairs right away. The moment I stepped into the place, I was shocked very strongly in mind, because I saw the long hallway and the placement which were the same with the ones I saw in the dream on August 3 2012.

I was then petrified. My staff asked me that “Which one is our place?” I said I don’t know. I just remembered the hallway was the one I ever saw in the dream. Nevertheless, we should still ask God’s will. Afterwards, we visited the other two places, and one of which is 2500 square meters and the other is 1700 square meters. The rentals were both very high, one for $1700.00+HST, and the other for $2500.00+HST. I didn’t have any impression about the two places.

My staff said “since you saw the place in the dream, let’s seek God’s will again.” On April 6, my staffs and I had an appointment with the landlord of the first place and came to the place. I found out that the place was much bigger than the ones we visited before and could seat 100 people. When we came in, they told us that they want Christian ministry, that is, they can only accept Christian ministry. They don’t accept either any other activity or any business.

They were delighted that we match their requirements. After introducing the whole place, we sat down to talk about the rental. They asked us “How much is your budget?” I said “Actually we don’t have any budget. Your offer is so favorable indeed.” Meanwhile, the Holy Spirit put the testimony of looking for the place in my mind, and then I shared the partial testimony for short with them.

After listening to the testimony, they said they were about to answer us maybe tomorrow. They wrote down every requirement we need and double checked with us via email. They answered us in the morning of the third day. When I talked with them in their office, the Lord then gave me a three digit number. For the last experience of looking for places, I asked the Lord to give us evidence. As long as the number the Lord gave us matched the offer they gave us, that would be the first one evidence. Then I set the second evidence.

They gave us two offers on the third day, one of which was the price God showed me in the office that day. The first evidence had been identified, and the second one satisfied our requirements as well. However we still bring the issue back to the overnight meeting on Friday night, and asked the Lord to make us know clearly that the place is prepared by God for us.

The organization which provided us the place is very special. They are the industry of serving churches, and they publish the evangelical magazine and operate evangelical TV medium. We can see Joyce Meyer, Joel Osteen, Zachary Kakobe, Benny Hinn, John Maxwell etc. inside, who are their sponsors.

When I returned to pray and asked God to give me evidence, the Lord gave me a word, “From now on, I will make OMEGA enter His destiny.”  I suddenly recalled that I should have ever seen the vocabulary “Destiny” at somewhere. At the same time, the Holy Spirit reminded me to see the name of their magazine. It turned out that its name is “Destiny.” My spirit was then impacted by the Spirit of God. And I knew it was the Lord speaking to us.

In the prayer, God revealed a vision affirmatively to prove it is the place God prepares for us. In the vision, the Lord made me see roasted peanuts in a porcelain bowl, and I knew it was God speaking to me that this thing has happened.

Thank You Jesus so much! That’s the whole story and the testimony of looking for the new place.

When we inquired to the neighbor about the market price of the unit of this place, one business owner showed us the lease agreement. It turned out that the rental for the place is about for $3500 + HST. I never thought God would be so gracious to us that we rent it with three digit number. Praise the Lord! Glory be to Heavenly Father!
Posted by Omega Ministry Service Centre at 17:25