A Night to Honour Israel with Jay & Meridel Rawlings 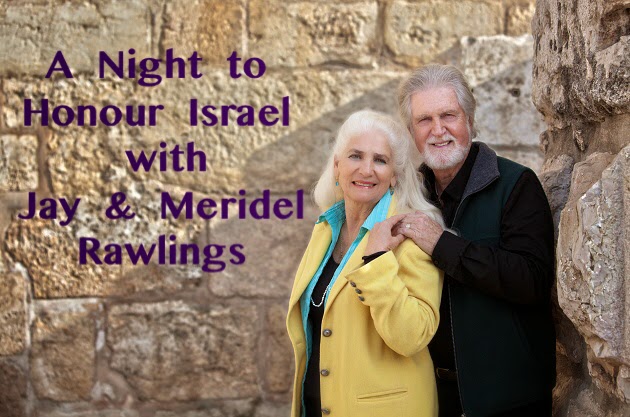 
A Night to Honour Israel with Jay and Meridel Rawlings

Originally from Canada, Jay and Meridel currently
live and work in the heart of Jerusalem.

As an Award Winning TV Producer, and Best Selling Authors
of TIMELESS SECRETS- Love My People
the Rawlings are returning to Canada because the Lord said...

"Go back to your nation and bless Canada, the one country that
today is considered Israel’s ‘best friend’ in the world."

Admission to this event is free! 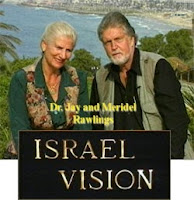 Jay is a Canadian Israeli dual citizen who has worked and lived in Israel since 1969. Jay has produced, directed and written over 130 documentaries on various aspects of Israel that have educated a global audience. Several of his awards winning productions were placed in Israeli Embassies and Consulates worldwide. Israel Vision, the Rawlings weekly TV program and blog giving a Biblical perspective on Israel’s historic cause, is broadcast worldwide and available on the Internet.

As some of the first "fishers” the Rawlings visited Jewish Communities worldwide calling them home to their Promised Land where the Jewish people have a unique prophetic destiny. For nearly five decades the Rawlings media input has focused primarily on the People and Land of Israel documenting the fulfillment of the everlasting Covenants and promises of the God of Israel in and through His people.

Jay, with his wife Meridel of 47 years, resides in Jerusalem with their four sons and eight grandchildren.

Works as a researcher, writer, speaker, TV host, Psychologist and therapist to the abused. Meridel was a public health nurse with aboriginal tribes in India and later with Mother Theresa’s Missionaries of Charity saving the lives of desperate Tibetan refugees in Darjeeling.

Fishers and Hunters, her best selling book has seen multiple printings. It takes the reader into Jewish Communities world wide telling them of the need to return to the safety of Israel in accordance with scripture. The majority of the stories were lived out by the Rawlings family. Today the need for ‘fishers, is more urgent than ever before with the impact of the ‘hunters’ rising up on a global scale. These radical Islamists and their doctrine of "jihad” are determined to destroy Jews, Christians, moderate Muslims and minorities. This epidemic is growing day by day.

As a survivor of child sexual abuse herself, she has for decades championed the cause for freedom for victims of abuse. She has produced a Power point, Small Talk, ‘for children of all ages.’ This cutting edge presentation gives tools needed to address difficult subjects; and equip children and people of all ages, not to "Put up or shut up!”

The Power of One is a DVD tracing her counseling work ‘one on one’ with clients in Europe and North America for the last 30 years. You will watch her counsel and teach during live sessions that bring dramatic change.

Meridel speaks out on vital family issues and abuse. Her highly acclaimed TV segment, Still Small Voice and newsletter impact people of all ages and add a unique and practical perspective on life.

Meridel resides in Jerusalem. Married 47 years, she and her husband, Dr. Jay Rawlings, have raised 4 sons in Israel and now have 8 grandchildren.

Email ThisBlogThis!Share to TwitterShare to FacebookShare to Pinterest
Labels: Events